Mysore pak is a popular South Indian sweet believed to be originated from Mysore region of Karnataka. It is prepared with Gram flour, sugar, & Ghee (clarified butter). It can be stored for 10 days in airtight container. 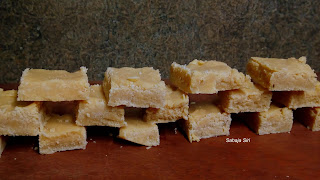 Here is a quick & simple recipe of Mysore pak which requires only 15 minutes. This is the  easiest mysore pak recipe that I have ever tried! There is no complicated procedure. I followed the original recipe from a Facebook group ‘Foodie’ which I follow the most. This recipe is from Savitha S. Bhat, who is a passionate cook & author of many value added recipes in the group!

Method:
Serve fresh & store the left in an airtight container. 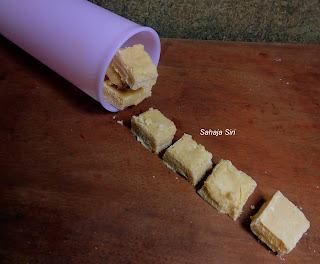 Note:
It is important to get the mysore pak out of heat on right time. If it is early, then you get the softer version. If it is late by 1-2 minutes, then you may not get the right pieces.
Posted by Nisha Mithoor at 03:49

Email ThisBlogThis!Share to TwitterShare to FacebookShare to Pinterest
Labels: Dessert/Sweet

I am an IndiBlogger

Nisha Mithoor
I am Nisha, Software Engineer by profession. I am passionate about cooking, travelling and gardening. I always had an inclination towards organic food and herbal medicines. The interest continues and I prefer natural remedies on the go. Wanted to share my practical experiences with like-minded. The result is Sahaja Siri- 'Richness of Nature'. Our journey starts with experiments on healthy cooking!

Here I am with a post on baking with fruits. I wanted to try out a bake with guavas for quite some time. It was in my to-do list. There, I...